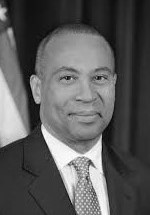 Deval L. Patrick, a director, founded the Together Fund in May 2020, a political action committee to support Democratic candidates for U.S. House and Senate in “swing” districts, dedicated to developing progressive change. From April 2015 to November 2019, Gov. Patrick founded and led the Double Impact Fund at Bain Capital LLC, a private equity impact fund that invests in for-profit enterprises for both financial return and measurable social or environmental benefit. Prior to that, Gov. Patrick was the governor of the Commonwealth of Massachusetts from January 2007 to January 2015, leading the Commonwealth through global economic collapse, weather and water emergencies, and a terrorist attack to top national rankings in job growth, student achievements, health care coverage, economic competitiveness, and energy efficiency. He significantly reinvested in infrastructure and schools while delivering fiscally responsible budgets and earned the highest bond rating in Commonwealth history. Before serving as governor, he was the executive vice president, general counsel and secretary of the Coca-Cola Company from 2001 to 2005.