Should investors in the Chinese stock market be concerned by the regulatory crackdown?

There has been a profound shift in China’s political and regulatory backdrop, which brings with it the potential for positive structural reform, but also introduces significant regulatory uncertainty and greater intervention by the Chinese state. Are all these changes bad news for investors in China’s stock market? On the contrary, we believe they may ultimately enhance China’s long-term growth prospects and should be broadly welcomed, not feared.

Read on to find out why investing in Chinese stocks may still be worth considering.

How will ’common prosperity’ impact investing in China?

The Chinese Communist Party is prioritising a vision of social fairness through a mantra of ’common prosperity’. The old idea that some will ’get rich first‘ has given way to a more equitable aspiration.

Common prosperity isn’t a new theme; it was first introduced by Chairman Mao in 1953. But the renewed focus is a recognition of the wide wealth gap which continues to exist; China’s richest 20% earn more than 10 times what the poorest 20% earn, which is a wider gap than evident in the US, Germany or France. Common prosperity may ultimately benefit the 600 million Chinese who live off a monthly income of less than US$154, although if such noble intentions are derailed, either by radicalism or overkill, China’s outlook will become more challenging.

While some have suggested that China’s new policy goals are simply about redistributing wealth, this is not true. It is about increasing the size and income of the middle class and improving social mobility.

In addition, some of the moves are to be applauded. Outlawing the controversial ’996‘ overtime policy, under which many technology sector employees work from 9am to 9pm, six days a week, suggests Beijing genuinely intends to improve the lot of its many low-income workers.

How will Chinese government action on the ‘three big mountains’ impact growth?

The primary aim of the Chinese government is to reduce the heavy financial burdens of education, healthcare and housing - dubbed ‘the three big mountains’ - for ordinary Chinese.

As such, regulatory measures have been introduced this year to bring sectors, from property development to technology and education, in line with the new policy thinking. Working towards these longer-term ambitions will entail short-term costs for growth, but monetary policy and regulatory relaxation will be used if needed to soften the impact on growth. It should also be remembered that China still has an objective to double the size of its economy between 2020 and 2035. To achieve this, it must grow at around 4.5% - 5% annually for the next 15 years. This means the Chinese authorities cannot afford for growth to be too badly impacted.

How have the markets reacted to Chinese regulation to rein in big tech?

From a financial markets perspective, the most concerning development has been the crackdown on China’s dominant technology companies. Tencent, Alibaba and JD.com have all been embroiled in the regulatory onslaught and their share prices have fallen significantly as a result. The moves to restrict the power of China’s tech sector can be ascribed to two motivations: antitrust and national security interests.

On antitrust, draft rules have been released which will ban unfair competition among internet companies and Alibaba was fined a record US$2.8bn in April 2021 for abusing its market dominance. The measures target practices such as false advertising, fraudulent online reviews, unfair competition, data protection and consumer privacy issues. Fundamentally, many of these moves are to be applauded, not vilified.

On the national security side, China’s heightened concern is not isolated. Governments around the world have recognised the importance of data and the need to regulate firms who rely on it as an integral part of their business models. Europe has the GDPR; India has clashed with Facebook and banned Chinese mobile apps - all in the name of national security.

Regulation and government intervention is not, in itself, unusual. After all, the US, UK and Europe are all grappling with how to regulate and tax technology companies which may have become too dominant in certain sectors. What is different about the Chinese situation is the abrupt nature of the moves and also, to a Western mind, the fact that rules, regulations and diktats are applied forcefully, without pre-warning or negotiation.

What has been the impact of education reform on investors in China?

The other most significant change has been to prevent private education companies, which teach compulsory school subjects, from earning a profit. This change, from seemingly unstructured capitalism, severely unsettled investors and prompted fears that other industries would also be forced to go ’non-profit.’

It is not likely that China’s crackdown on the education system will be applied more widely. The circumstances surrounding education were unique - due to tutoring firms exploiting parental paranoia, subjecting children to chronic stress, and persuading hundreds of millions of parents to part with their life savings.

How important is private enterprise for China’s growth ambitions?

With all the fear about regulations and their impact on private enterprises, the private sector is still an integral part of the Chinese economy and it would not be in China’s best interests to decimate the sector. Equally, there is no intention to broadly undermine the internet sector.

Share of private vs. social enterprise in key areas of the Chinese economy 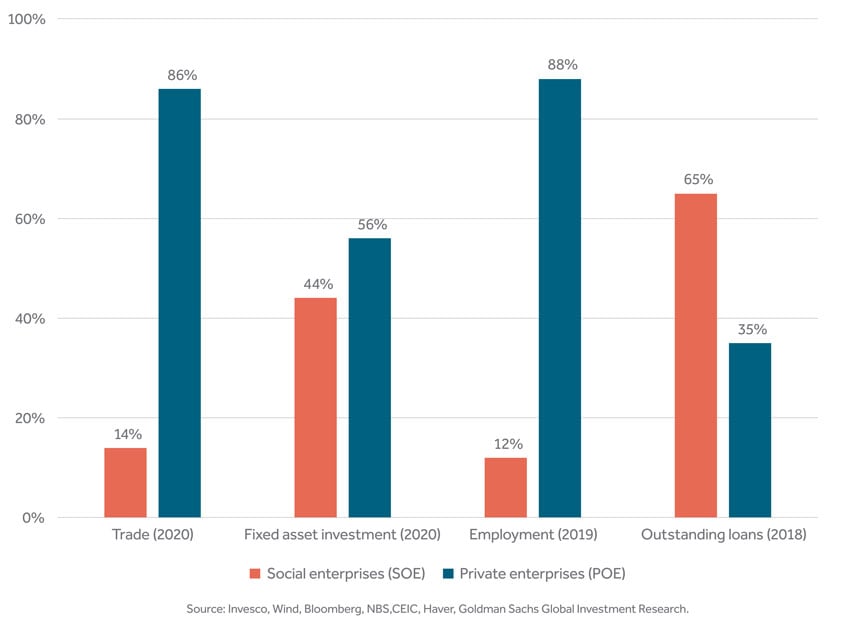 The private sector is a key pillar of China’s growth and represents more than 60% of GDP and nearly 90% of employment. China wants to increase the size of the economic pie and distribute the rewards more equally. This requires changes to the regulatory framework which, it is hoped, will promote healthy industry growth and efficiency.

How is the Chinese government handling China’s corporate debt problem?

Added to this mix is the likely default of the nation’s biggest property developer – Evergrande – which could leave many banks and investors nursing significant losses. It is the world’s most debt-saddled property developer; it has US$300 billion of debt, hundreds of unfinished buildings and suppliers who have shut down construction sites. The company has started to pay overdue bills by handing over unfinished properties.

Will the Chinese government step in to save Evergrande? This is unknown, but a full-scale collapse would cause serious damage and Beijing has stepped in to help other large companies with problems in the past. On the other side of the argument, the authorities have shown greater willingness to let companies fail in order to rein in China’s debt problem and Evergrande’s management have been told, in no uncertain manner, to get the company’s debt in order.

How will all this regulatory change impact investment opportunities in China?

While there has been a focus on the dangers of China’s regulatory moves, it is important to recognise that investment opportunities in China could also be presented. These could include: 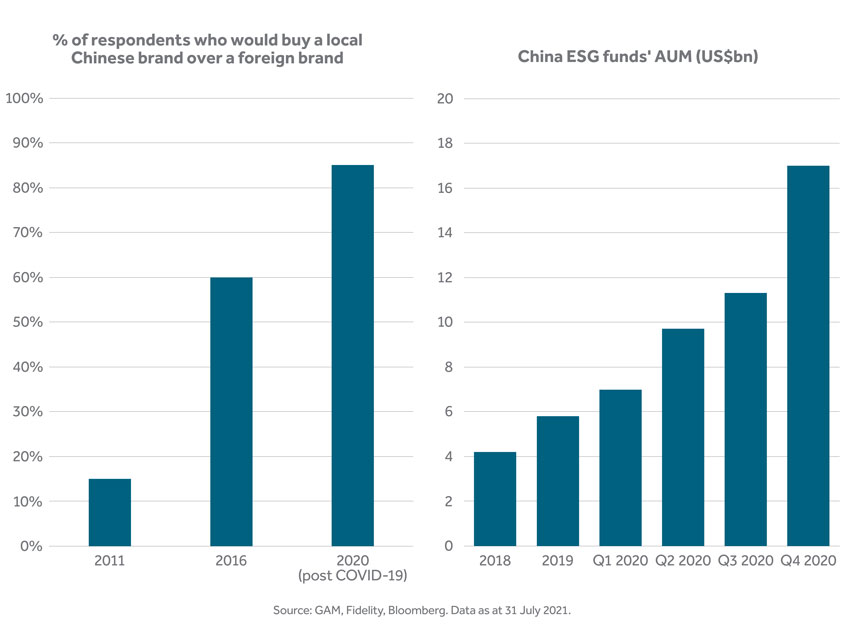 What now for investing in China?

For investors considering China, it is very difficult to know what discount should be applied to Chinese stocks given the current regulatory uncertainty. It is likely that this will remain a stock-pickers’ market in which sectors favoured by policy will remain a safe haven. For example, Beijing’s ambition is to embrace self-sufficiency in semiconductor manufacture and software development.

We have decided to retain our small overweight investment in China for now, which is part of our broader Asian exposure, and do not believe that this is the time to be unduly influenced by sometimes sensationalist headlines.

If you would like to discuss investing in China, get in touch to speak to a professional wealth adviser.

Speak to one of our investment experts

To discuss your investment needs, book a complimentary, no-obligation consultation.

If you found this interesting, here are our related articles:

Charts are for illustrative purposes only and should not be relied upon for any other reason. Information is correct as at date of publication. 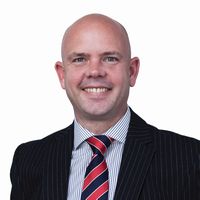