Should investors be worried about soaring global debt?

The response to the coronavirus pandemic has been an unprecedented increase in global debt. Governments and companies have borrowed exponentially to help economies, households and businesses survive the economic damage caused by lockdowns and societal restrictions.

Unfortunately, global debt has already been on an uptrend for decades. In the UK alone, the economy was burdened with heavy debts well before COVID-19 reached us (see graphic below).

Budget deficits have been piling up without governments having enough surplus to bring the debt down (with the notable exception of Germany). This time around, the cure for the COVID-19 economic crisis is to ‘make the economy whole’ after its losses during the pandemic. This involves governments giving money to people and companies to protect them from unemployment, default or bankruptcy. Never has there been so much fiscal support for the economy in the US, UK, Europe or Japan, apart from during world wars. 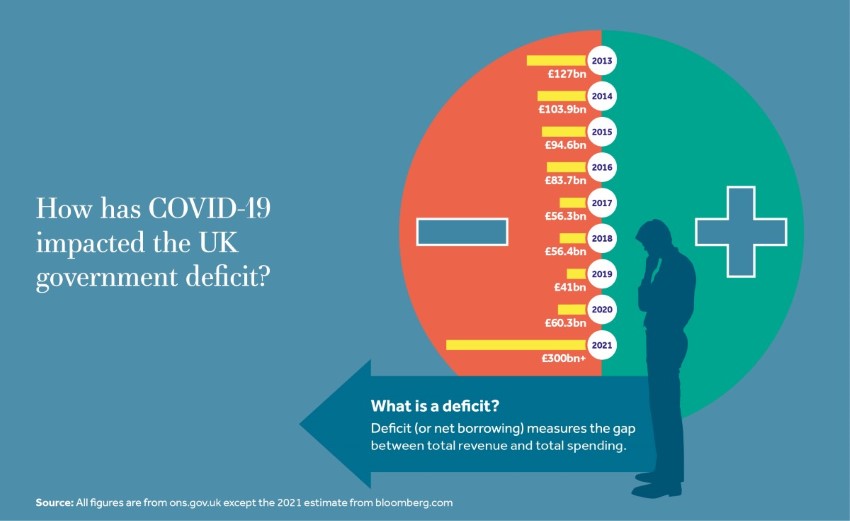 What does this mean for world economies?

Will the world be engulfed by an unsustainable debt tsunami? How can debt levels be brought down – and will there be an impact on investors?

After both WWI and WWII, governments around the world were similarly crippled by debt. On that occasion, it was brought down as a percentage of the economy thanks to the massive economic expansion of the post-war eras. The debt was instrumental in boosting growth but also fed into inflation.

Do we have the same opportunity for growth now? Probably not: populations are older, there is no major reconstruction effort and our standard of living is already high. Indeed, global demographic growth (which broadly determines economic growth) was the highest in history during the 1950-2000 period, enabling countries to pay down their debt quickly, whereas the 2000-2050 period is expected to grow less than half as fast. 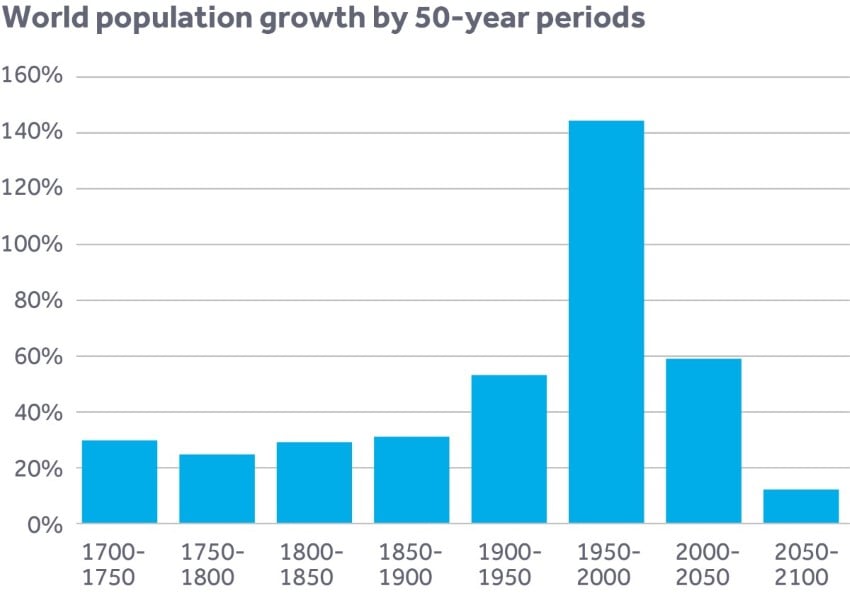 The worry is that this could lead to ‘Japanisation’: namely no growth, deflation, depressed people and falling demographics. In the UK, the Chancellor has announced spending to create a budget deficit in the amount of 20% of GDP between this year and next, while the US has approved total spending of 25% of GDP between last year and this year.

However, we should point out that between 1942 and 1945, US budget deficits reached 80% of GDP, so we are still in modest territory here! 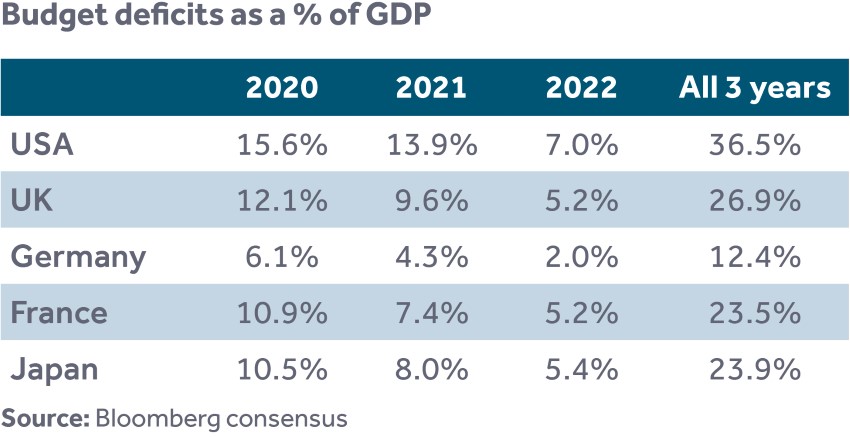 Will we see a repeat of austerity?

The last cycle was marred by austerity, which is now a dirty word in the UK and most European countries. Economies barely recovered as central banks were giving money with one hand and governments were taking it away with the other. It is a brave finance minister anywhere who will attempt to balance the budget in the next few years via austerity, let alone start paying down the debt. Nevertheless, some effort in that direction will take place, if only to pay lip service to fairness, equality and redistribution by raising taxes. This may well happen in the US with corporate tax rates, capital gains and marginal income tax rates, if Biden can maintain a majority in the Senate.

After WWII, capitalist US had 90% marginal tax rates, while taxes were also very high in the UK and Europe. Could that happen again? In the UK, the Chancellor has announced an increase in corporate taxes starting in 2023 and a freeze on tax reliefs elsewhere to target individual taxpayers (a ‘stealth tax’). Maybe in the future, capital gains and inheritance taxes could rise and there could be an online sales tax. It’s very hard for both a government and a central bank anywhere to say publicly that debt should be ignored, so there will be moves in taxes to address this.

Is cheap debt the answer?

Right now, the UK can borrow long term below 1%, the US below 2%, and both can reinvest the money into their economy. If their economies grow faster than these rates and also have some inflation, the borrowing cost will be easily absorbed and the debt ratio could fall back to more acceptable levels without tax increases.

Although it’s highly unlikely we’ll see a repeat of the post-war years’ expansion, the expected economic growth in the US and the UK over this year and next adds up to 10%. Growth will obviously taper over time but could still be way above borrowing costs for many years, helping shrink the debt-to-GDP percentage, as happened post WWII.

The cost of debt can rise, but only moderately: the US debt service is currently 1% of GDP and is expected to double to 2% over the decade but still settle below where it was in the 1980s and 1990s.

Following the 2008 financial crisis, there was much talk among economists about which level of debt could stifle growth. Many economists agreed on 90% of GDP. Since then, many countries have exceeded that percentage without any noticeable reduction in their growth rate, so we have to assume that there is no magic number. Instead the relevant factor is the comparison between economic growth and borrowing cost (as with any company taking on credit to invest).

The issue may well be one of creditworthiness beyond simple debt ratios – i.e. do lenders trust the sovereign borrowing country? The US often benefits from a Teflon reputation, given that it borrows in its own currency, which the rest of the world needs. Japan’s debt levels are off the scale, but 96% of Japanese government bonds are owned domestically, so the risk of a run on them is seen as minimal. European Union members are often basking under the German sun, with weaker credit countries expected to be bailed out by the strongest EU members.

Which brings us to the UK. As a country with its own currency, the UK can borrow without foreign exchange risk but, given its large twin deficits (trade and budget), the government has to satisfy investors, whether domestic or foreign, that it will be able to repay its debts. The UK’s creditworthiness has often been perceived as higher than strict economic criteria would dictate, owing to an image of economic seriousness and political stability. How long will we be able to keep that gilt-edged status?

Inflation is a popular way to reduce debt in the economy – so against the backdrop of high debt, rising prices should be welcome as a way to clip the potential tax burden. When investing in corporate bonds, though, there is the concern of companies being ‘crowded out’ by government borrowing.

High government debt should not normally be a major concern for investors. Although governments around the world will be working hard to reduce their debt burdens, the risk to investors is low.

However, we believe the biggest impact on individuals will be via tax.

If you have any questions about the current environment or about your investments, please get in touch with us or email questions@canaccord.com.

Please remember, if you hold an account with Canaccord, you can check your portfolio value at any time, through Wealth Online or by getting in touch with your Investment Manager.

Michel is responsible for the investment process and Chief Investment Office at Canaccord Genuity Wealth Management, with a specific focus on asset allocation and investment selection.