The Great Inflation Debate: What Lies Ahead 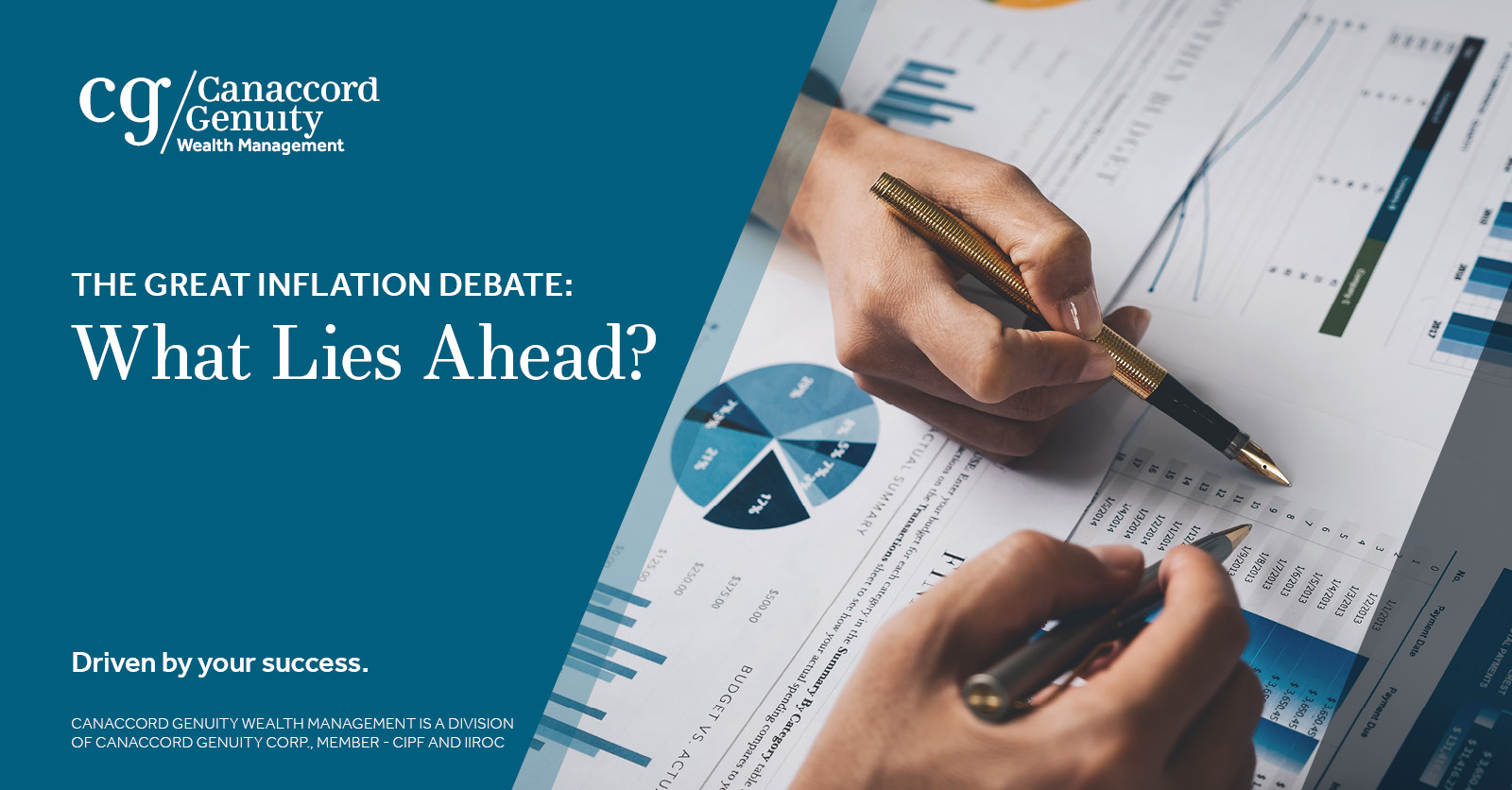 With inflation rates at their highest in decades, a debate has been triggered about whether we are entering a heightened inflationary period that is here to stay. According to the latest figures,Canada’s inflation rate spiked to 4.4 percent in September, a level that hasn’t been seen since 2003.1 Will inflation continue at these higher levels? There are differing schools of thought. Some suggest that pandemic-related anomalies have created a transitory situation and inflation will eventually normalize. After all, inflation is a lagging indicator and recent figures are year-over-year rates measured against a period in which economies were struggling due to the pandemic. Others believe that we have entered an inflationary period that will be difficult to restrain.

First, a Primer on Inflation

Inflation is a measure of the increase in the prices of goods and services over a given period of time. The Bank of Canada uses the Consumer Price Index (CPI) as a basis for its measure of inflation. CPI is calculated by comparing the price of a government-assembled “representative basket” of commonly used goods and services, which is intended to represent a big picture view of consumer spending across Canada. According to the Bank of Canada, over the past 30 years CPI has increased by 71.2 percent, which equates to a change of around 1.8 percent year over year.2 It should be noted that the measure typically used by the Bank of Canada is “core inflation,” which doesn’t include some of the more volatile components of our goods and services like food and gas – everyday costs incurred by most individuals. Many Canadians would argue that food costs have largely outpaced core inflation rates.

However, at the same time, it may be easy to forget that the costs of certain goods have also gone down during this time – consider that improvements in technology have made products like TVs and computers much more affordable than years ago. Inflation hasn’t always been kept in check. In the 1970s and early 1980s, inflation and interest rates ran rampant. Those of us old enough to remember may recall when inflation rates reached over 12 percent in the early 1980s. This was also a time of high interest rates, which meant great returns on low-risk assets like guaranteed investment certificates: the now defunct Canada Savings Bond returned 19.5 percent interest! Since that time, it has been widely recognized that the central banks are responsible for keeping inflation in check as part of their policy objectives. Over the past few decades, inflation has generally been kept close to a two percent target, due to monetary policy actions as well as persistently low price and wage increases.

Why is Inflation Concerning?

Why can inflation be a cause for concern? First, inflation erodes an individual’s purchasing power. Even seemingly benign rates of inflation can make a significant impact over time – consider that with an annual inflation rate of 3 percent, what costs $1,000 today will be priced at over $1,800 in twenty years’ time. For seniors who may be on a fixed income, even small increases in annual inflation can be troublesome. In environments in which inflationary pressures are significant and ongoing, it can erode the value of cash and encourage consumers to spend and stock up on items that are slower to lose value. Perhaps one of the most extreme examples was seen with the hyperinflation experienced in Zimbabwe in 2009, when the inflation rate hit 230,000,000 percent. Prices would change by the minute, but the country kept printing money. At the height of their economic problems, Zimbabwe issued a 100 trillion dollar bill – the largest denominated note ever to be circulated. When the Zimbabwean dollar was abandoned as the official currency in 2009, the 100 trillion dollar bill was only worth about US$0.40.3

What is the path forward for inflation? Today, there are two differing perspectives on the current inflationary situation:

Inflation is transitory. Those who believe that inflation is transitory suggest that the spike in prices is due to the effects of the pandemic and are likely to temper as economies eventually return to normal. First, inflation figures are being measured against a period in which many economies were partially shut down. We are also being impacted by supply chain complications that have resulted from these economic shutdowns, leading the prices for many goods and services to increase. Consider the automotive industry’s chip shortage: because many overseas chip manufacturers ceased operations during the pandemic, we are now seeing higher inflation for many products that use these chips. We have also seen significant increases in pandemic-related demand for other products, such as used cars in the U.S. as people shied away from public transit, which led to skyrocketing prices. Labour shortages have also created supply chain disruptions that have resulted in higher prices. Some believe that labour issues have been exacerbated by government stimulus, resulting in some workers to temporarily leave the labour force. As stimulus winds down and economies return to normal, it is expected that supply chains will also normalize. However, given that the pandemic is lasting longer than many expected, inflation may not begin to moderate until the coming year. Inflation is endemic. Others believe that higher inflation is here to stay, largely due to the significant influx of stimulus that has increased the money supply. Average wages have also been increasing, partly due to labour shortages, and may be exacerbated by higher inflation rates. Some suggest that increasing wage rates will continue as workers demand higher wages to compensate for the higher cost of living, and businesses will need to raise their prices due to this increasing input cost. Other input costs have been rising and some expect these costs to stay at elevated levels. For instance, those who believe that the price of oil will stay at higher levels point to greater supply constraints as policymakers pursue green energy initiatives.

In this inflation debate, some pundits have suggested that we are headed towards a period of stagflation, reminiscent of the 1970s when high inflation became embedded into the economy. However, we shouldn’t forget that the 1970s period of stagflation was caused by a confluence of factors that aren’t being mirrored today: an oil price shock (including an OPEC embargo that sent oil prices quadrupling), a regulated natural gas industry in the U.S. that stifled advancement and significant structural changes in demographics as women entered the workforce.

Where to for Investors?

So, for investors, what should we do? First, we should recognize that we’ve never experienced a situation of this magnitude: the unprecedented actions taken to combat the Covid-19 pandemic have helped to distort market and economic cycles. While we should expect ongoing inflationary pressures as things continue to normalize, we are likely to see inflation moderate throughout the coming year. Some market observers suggest that we may also see the central banks look to raise interest rates earlier than expected as a result of this more persistent inflation – the Bank of Canada recently signalled that it may accelerate its potential timing.4

We can look to protect our portfolios against inflation if we believe that it will become more endemic. Certain asset classes, such as real estate and gold, may be hedges to inflation. In previous times, fixed-income products like real-return bonds and U.S. TIPS (Treasury Inflation-Protected Securities) have been used to protect against inflation, but with the potential for rising rates, investing in longer-term bonds has its risks. The good news for investors? One of the best ways to protect from inflation is to stay invested and ensure that our assets grow and offset the potential effects. Over the past 30 years, the S&P/TSX Composite Index has gained over 475 percent throughout this time, or a compounded annual return of 6 percent, and this doesn’t include the impact of reinvested dividends.5 If history is any indicator, equity markets continue to be a great way of growing funds for the future and ensuring that any effects of rising inflation are effectively counterbalanced.

If you would like to find out more about Canaccord Genuity Wealth Management or any of our services, please get in touch.