Many of us have grown accustomed to living in a world of low interest rates. For much of the past two decades, interest rates have been held at relatively low levels, in part due to slower economic growth and low inflation. Since the start of the millennium and until recent times, inflation levels1 have never surpassed 4% and often struggled to reach 2%.2

In response to persistently high inflation – the latest reports indicating that inflation has risen to 8.1% here at home3 – the central banks are taking an even more aggressive approach to hiking interest rates. In July, the Bank of Canada surprised the markets by increasing its overnight lending rate by a full percentage point – its largest hike since 1998, signaling that it may feel it waited too long to get inflation under control. Since the start of the year, the bank has already raised interest rates four times, increasing the overnight rate from 0.25%, where it stood since March of 2020, to 2.5% – its highest since the global financial crisis almost 15 years ago.4 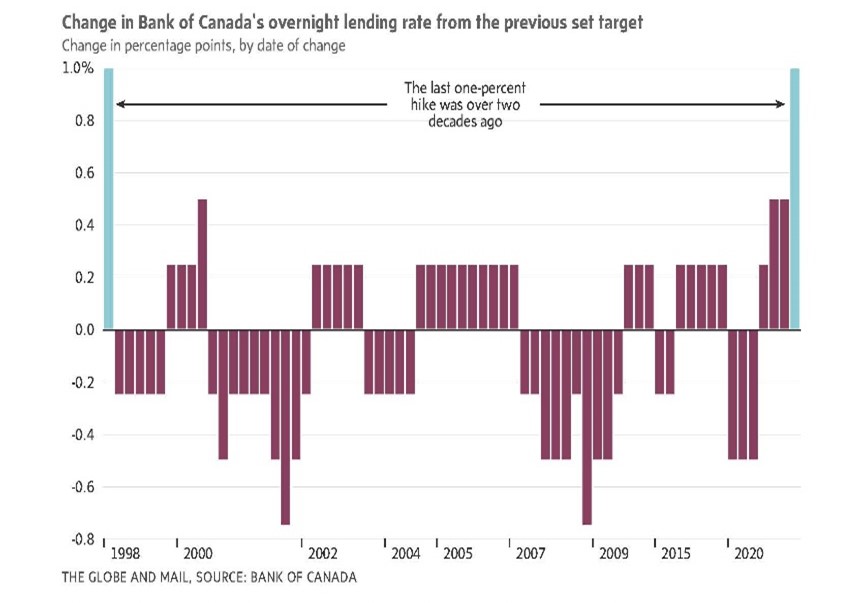 Higher interest rates encourage saving and discourage borrowing by making it more expensive, which in turn helps to reduce spending and demand. Today, demand has exceeded supply for many goods and services, which has pushed prices upward. This has largely been attributed to actions taken during the pandemic, including unprecedented stimulus, and lingering supply chain issues from the economic shutdowns, as well as the ongoing conflict in Ukraine.

One of the expected outcomes of aggressively raising rates is that it will slow economic growth. This is why many market observers have voiced concerns about a potential recession. As economic growth slows and demand declines, many companies may look to reduce their costs, which can lead to increasing unemployment. Yet, given the strong labour markets closer to home, the central banks hope to create a “soft landing” – the ideal “Goldilocks” scenario in which growth will not be slowed too much, and prices will cool to the right level.

What about your personal finances?

Over the past decade, debt has been relatively affordable due to predictably low interest rates. For many, it was easy to assume debt with little worry. Now, borrowing is growing most costly as interest payments become higher with increasing rates. Debt with fixed interest rates will not be affected, such as fixed-rate mortgages with locked-in rates over the term of the mortgage. However, those who hold variable-rate mortgages, lines of credit or other variable-rate loans are likely to see their costs go up – and many may not have been prepared for rates to rise as quickly as they have. As well, the potential for ongoing increases should not be overlooked. Adding to the strains are higher rates of inflation. Almost all of us have been affected by the growing cost of groceries, gas and other goods and services.

While the hope is that higher interest rates will help to bring inflation under control, there may be considerations as we continue to be confronted with the challenge of rising rates:

Pay down debt. Consider the opportunity to pay down as much debt as possible. If you hold multiple debts, consider prioritizing those with the highest interest rates, such as credit card debt, as they are more expensive to carry. It may be prudent to understand the terms of your loan(s) and the effect of potential rate increases on the amount you owe. For instance, if you have a variable-rate mortgage, consider how additional increases in interest rates will raise your interest payments or reduce the amount of principal you pay down. Your amortization period – the time it takes to pay down the mortgage in full – may increase. For example, increasing the variable rate from 1.5% to 4% while keeping the payment amount fixed would increase an amortization from 25 years to 45 years.

Revisit your budget. With increasing interest rates, if you have debts to service it may be beneficial to reassess your budget to prioritize paying off this debt. But even if you don’t hold debt, revisiting your budget may be a worthwhile exercise in this period of high inflation. The costs of most goods and services have increased over recent times. Even if you have sufficient funds available, there may be value in having a comprehensive view of your spending habits – you may be surprised at how much you spend on certain items and it may prompt you to better balance your spending priorities.

Consider the potential impact on the housing market. Interest rate increases are expected to cool the housing market, which may already be showing signs of slowing.5 Higher rates increase borrowing costs, which can make it more difficult for some to qualify for a mortgage or reduce the size of a loan. This is expected to temper demand and may lead to a decline in housing prices. Over many years, low interest rates have helped to support increasing home prices: capital was easily available, new buyers entered the market for fear of missing out and bidding wars became common in many metropolitan cities. This also attracted many investors and speculators, which further pushed up housing prices. However, we shouldn’t forget that, just like other financial assets, the housing market has the potential to experience declining asset values.

Sitting on cash in low-interest savings accounts? Those who have been sitting on cash in low-interest savings accounts may look to revisit their options as interest rates increase. Low-risk, fixed-income investments that have largely been abandoned due to persistently low interest rates may start looking more attractive – some five-year guaranteed investment certificates (GICs) now have rates as high as 5%. Other fixed-income investments have seen increasing yields – the benchmark Government of Canada 10-Year Bond yield reached a high of 3.627% in mid-June, but at the time of writing has retreated in response to weaker economic data. Of course, the fixed-income market has had a difficult year as rising rates have pushed down the price of bonds and further rate hikes, and volatility, may be expected. However, bond prices and yields move in opposite directions, so lower prices may offer the opportunity to take advantage of higher yields. Where dividend-paying equities have been a key source of income for many investors, certain bond yields may increase to levels that, for some, will provide potential income opportunities.

Benefit from the strong labour market. With struggling financial markets and rising inflation, for now the labour market may be the one bright spot during these challenging times. Today’s labour market is still considered to be “tight” – there are significant job vacancies, with few available workers to fill them. As such, some personal finance experts suggest that this may be an opportune time for those who are part of the working population to survey the job market and potentially increase income.6 This may involve upgrading your current job, asking for a raise, finding a new workplace with better benefits, wages or bonuses or even getting a part-time job.

1. As measured by the Bank of Canada’s Consumer Price Index or “Total CPI.” Please see: https://www.bankofcanada.ca/core-functions/monetary-policy/inflation/
2. https://www.bankofcanada.ca/rates/price-indexes/cpi/
3. https://www.cbc.ca/news/business/canada-inflation-rate-1.6526060
4. At July 31, 2022. In July 2008, the Bank of Canada overnight rate was 3%.
5. https://www.theglobeandmail.com/business/article-canadian-home-prices-spiral-down-in-june/
6. https://www.theglobeandmail.com/investing/personal-finance/young-money/article-cutting-spending-to-deal-with-higher-mortgage-rates-and-inflation-is-a/

Six Money Questions to Discuss with Your Partner

Making Sense of the Volatile Markets

Is Canada at Risk of Stagflation?