Post-COVID-19 tax planning: what can I do to mitigate tax rises?

The UK government – and others around the world – have accumulated massive deficits while trying to mitigate the economic impact of the coronavirus pandemic on individuals and businesses. Essentially, they have three options to try and reduce their debt burdens:

We explore the last two options in a separate article (click here). In this one, we discuss option 1, the effects of the most recent Budget and the way changes might affect you.

The Chancellor has made it very clear that a return to the austerity of 2008 is not part of his plan up to 2026. In the Budget on 3 March he kept the Conservative party 2019 manifesto pledge not to raise income tax, national insurance or VAT. However, we now know that there will be UK tax increases in the medium term to help address the huge debt burden.

The good news is that if you start considering the recent and potential tax changes now, you should be able to mitigate some of the adverse effects. Wealth planning and making full use of tax reliefs (e.g. for pensions, capital gains tax and higher rate income tax) while they are still available, will be vital.

First, however, let us remind ourselves of the economic reality.

Why is there such a large deficit?

Even before COVID-19 reached our shores, the UK economy was burdened with heavy debts. Over the years, successive administrations have consistently spent more than they raised, accumulating a substantial national debt. COVID-19 has caused this deficit to rise to record levels. 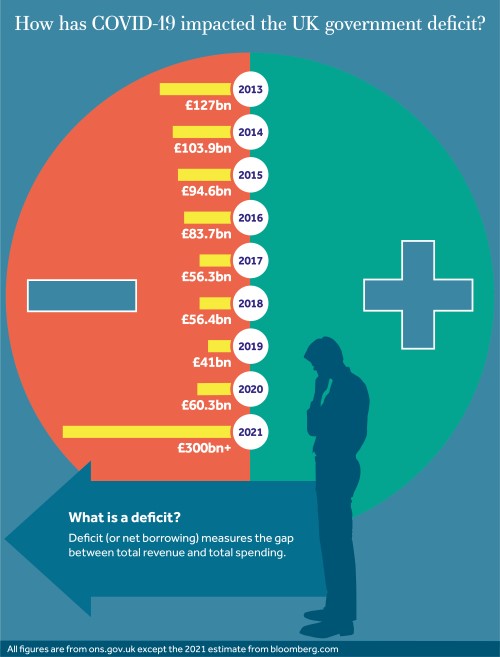 Instead of the hoped-for decline in deficit, COVID-19 will produce the largest annual deficit since the end of WWII. The UK’s total debts currently stand at over 100% of GDP.

How will the government raise the money it needs from taxes?

As you can see from the pie chart below, the big three income streams for the UK government are income tax, National Insurance (NI) and VAT, and these will have to do the heavy lifting. And although not glaringly obvious, the Chancellor has already started to put income tax to work in the latest Budget. By announcing that he would freeze the thresholds at which the basic and higher rates of income tax are paid from April 2022 to April 2026, he has in real terms effected a tax increase.

How has he done this?

Allowances and tax thresholds are usually increased in line with inflation each year.

Not doing so means that when someone receives an inflationary pay rise, potentially more of their income falls into higher rate tax brackets – meaning they are no better off – in fact, they could be worse off. For example, if all prices have risen by 2.5% and your salary has increased by 2.5%, you can only buy the same amount of goods that you could the year before. If the tax thresholds do not increase by a similar amount, potentially you are going to be paying more income tax on the increase.

This is politically clever. There is no shock to the individual of having to pay higher tax and the government has kept to the letter of its manifesto promises. Rates of tax have not increased. Nasty headlines about tax increases have been avoided.

It is also clever economically. The tax increases (that don’t feel like increases yet) are heralded and are going to appear over the coming years, making them effectively a tax on inflation and growth. For individual taxpayers, they are going to be incremental over a longer period of time.

In addition, the future deficit is now predicted to reduce because of the increase in tax take. The Office for Budget Responsibility (OBR) has calculated that freezing tax thresholds will raise £20bn of extra revenue over the next four years. 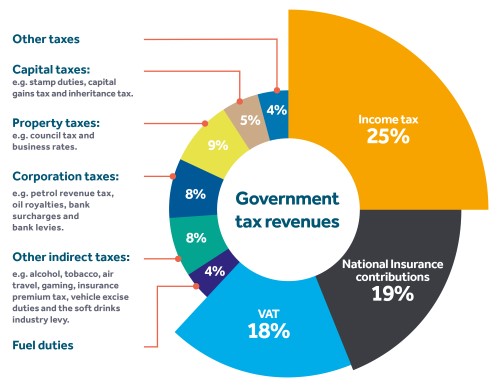 What other changes were introduced in the Budget?

The biggest Budget announcement is that corporation tax will increase - and significantly for large companies - effectively to pay for the giveaways in the last Budget. With Brexit, there is a risk that raising corporation tax could undermine the case for siting companies in the UK, but the proposed rate is still lower than in any of the other G7 countries.

As well as the income tax thresholds as explained above, the government will also target individual taxpayers by freezing tax reliefs in other areas.

In the areas where wealth planning can help you to mitigate tax liabilities, we offer our expert thoughts below.

Firstly, the government has frozen the pensions lifetime allowance (LTA) at £1,073,100, which is estimated will help the government raise an extra £1bn over the next four years.

While this specifically targets people with larger pension pots, it will also affect people who have worked in the public sector and who have contributed to public sector schemes over many years.

In the future, the government might also review the state pension’s triple lock. This ensures that the state pension increases by the rate of inflation, average wage growth or a minimum of 2.5% per annum.

The final element of the guarantee is the most contentious and we would argue needs to be removed. Now we are in a significant recession, the UK inflation rate is currently running at below 1% pa. For many years it has been at or below 2.5%. As a result, state pensions have grown above the inflation rate. The 2.5% minimum lock is now too generous and removing it would save the government money.

Contrary to speculation, the government has neither increased the rate of CGT nor reduced the annual CGT exemption but merely frozen the exemption. In effect this will again raise taxes as growth and inflation occurs and the OBR estimates these changes will net £658m over the next four years.

The Chancellor announced that he would freeze the tax threshold for inheritance tax until 2026. IHT is a particularly unpopular tax for Conservative governments, so any further changes were always going to be problematic.

The seven-year rule of potentially exempt transfers, where gifting to others can avoid IHT, could have been attacked by introducing a charge on lifetime gifts. However, this would have been complicated and potentially difficult for HMRC to monitor and collect. Further down the line, increasing the IHT rate is a possibility – and much easier to collect.

Will NI and VAT eventually rise as well?

We believe so. Here are our predictions:

We believe the government is likely to increase the NI rate from the current 12%, and perhaps also increase the level at which the reduced rate of 2% becomes payable, currently on annual earnings above £50,000. This would capture more earnings in the 12% band. In our opinion, this will not be matched by increases in employer contributions, as this would be seen as a tax on jobs.

An increase in VAT could be a long-term option. VAT affects those on lower incomes disproportionally more than those with savings and high incomes, so the Chancellor may continue to reduce VAT on necessities or on those sectors of the economy he wants to support. However, we believe he will try to get some of the money back with VAT on discretionary spending and luxury items.

Having said that, the changes that have already been announced mean that the tax take in the UK will rise to the highest it has been since the 1960s.

How could wealth planning help me to manage my tax liabilities?

We believe it is vital to reconsider your financial arrangements – definitely sooner rather than later. You should consider bringing any planning forward if you can.

You will probably need to maximise your pensions and other allowances while they are still available, look at the current structure of your assets and, if you haven’t done so already, look at different scenarios to see which is best for you.

Proper wealth planning will help mitigate some of these hidden tax increases, even if it cannot eliminate the effects of all of them, and will mean that you are well placed to weather the real term increases that are coming.

With the stamp duty holiday also extended, now could be a particularly good time to consider gifting to help your children or grandchildren onto the property ladder. It’s important to consider how this will affect your own future plans – will you still be able to afford later life care if you gift now to take advantage of the current IHT allowances? Will you still be able to afford the retirement you have been dreaming of? And what would happen if we had another unexpected economic shock?

These are all important questions that our wealth planners can help answer by creating a personalised cashflow forecast for your financial situation. This will look at your current position and explore various scenarios to confirm what you could gift now – and how – while ensuring that you don’t gift so much that your future life is adversely affected.

If the pandemic has affected the way you earn, or had an impact on your plans for retirement, you may feel you would benefit from talking to one of our experts about issues that are concerning you. If so, please contact us or call us on +44 20 7523 4500.

If you would like to read more about investment in the post-COVID-19 world:

The tax treatment of all investments depends upon individual circumstances and the levels and basis of taxation may change in the future. Investors should discuss their financial arrangements with their own tax adviser before investing.

The tax treatments set out in this communication are based on our current understanding of UK legislation. It is a broad summary and cannot cover every circumstance and it does not constitute advice. 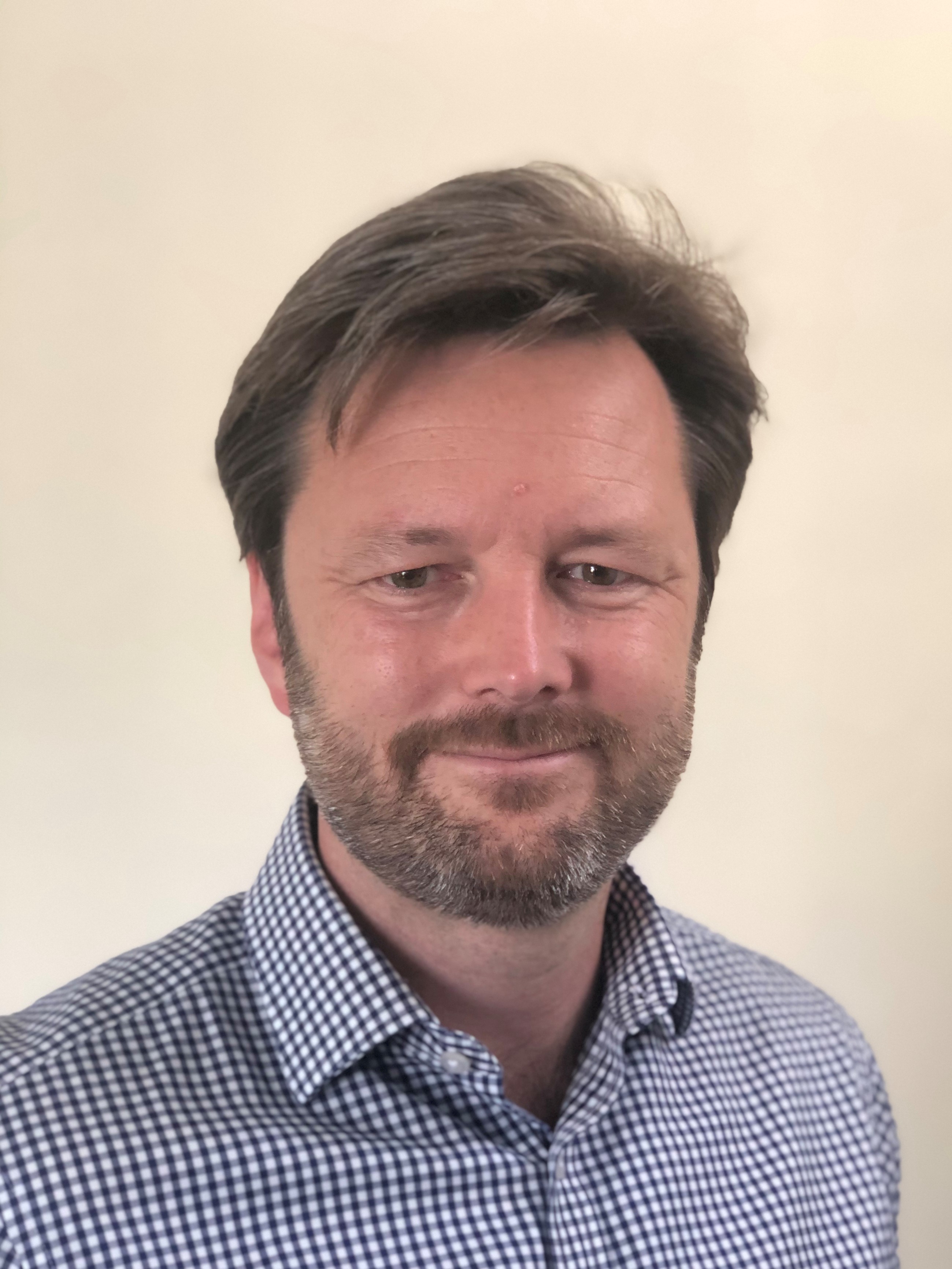